There are a couple of sports that have a US Open tournament every year, including tennis, but the US Open golf championship is probably more highly rated. Known as the United States Open Championship, the US Open is an annual golf tournament that takes place in June every year, and it is the second of four major championships in golf via the PGA tour. As long as the weather doesn't force the tournament to reschedule, the final round every year is slated for the third Sunday of the month, which is Father's Day.

One thing that many people appreciate about the US Open is that it doesn't take place on the same course every year. It moves around through a variety of courses. This not only makes it fresh and exciting to watch, it also makes it more difficult to play. For instance, in 2011, Rory Mcllroy set records for both the aggregate score (268) and one round to par (-16). Though to keep this from repeating, in case anyone is overly familiar with a single course, the US Open moves around. This year, the tournament will be played at Chambers Bay. To date, there have been 120 US Open tournaments, starting all the way back in 1895. Over its century-long history, every great golfer whose name lives on in history came through and won this major at least once.

The US Open consists of four individual rounds of golf. The first two narrow the field down based on how well the golfers do. A final cut will be made, and only those with competitive scores will move on to play the final two rounds. Each round is a par 72, and the total yards (for 2015) will be 7,585. And each golfer is paired with another to tee off and follow for all 18 holes (hence the pairing line).

Betting On The US Open Golf Tournament

You will find our #1 pick on where to bet on the US open legally. Bovada is a giant in this industry and have a perfect reputation with players. So you can feel confident that your money will be safe, and your payouts will be timely. Below that we offer reviews on other reputable sportsbooks offering a wide range of golf betting lines.

US Open Betting Odds: The odds are usally released 1 week prior to the start of the tournament. To view the latest odds, simple log into your sportsbook account and click on golf. From there you will have a wide range of betting options to choose from including head to head matches, odds on who will win, tons of prop bets and more. 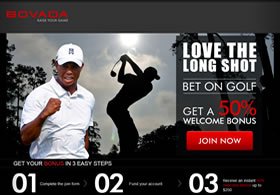 If you are looking for competitive odds and lines for betting on the US Open, then Bovada will have what you need. They cover the tournament from beginning to end, and offer new players a 50% match bonus up to $250 with the first deposit into their account. They accept USA players exclusively and are a part of the respected Bodog network. They are licensed and regulated and legally offer US Open betting lines to American sports bettors.

A Brief History of the US Open

While today's US Open pays off millions of dollars, it certainly wasn't always that lucrative. In 1895, when the tournament was first held at the Newport Country Club via Rhode Island, it was attended only by ten professional golfers and one amateur player. It was only a 36-hole competition, with one 9-hole round played four separate times. When it was over, a 21-year-old named Horace Rawlins won, and he received only $150 and a gold medal as his top prize. For the next sixteen years, British-born players dominated the US Open, but after 1912, golf had really taken off in the United States, and American-born players started to dominate the field on a yearly basis.

In fact, since 1950, the US Open has only been won by a foreign-born player from six different countries. For some reason, South African players seem to do very well at the US Open, winning five times since 1965, but by and large it's a tournament that American players pretty much own.

Perhaps the most famous year for the US Open was in 2011, which makes it fresh in peoples' memories. Rory Mcllroy, who was considered to be a second-tier player behind Tiger and Phil, by most accounts, really came to life and staked his claim to professional golf by breaking old records for the best overall score and the best round score en route to winning the championship. Only 22 at the time, this was a very impressive feat that forced the golfing world to stand up and take notice. It's hard to predict who's going to be a favorite in this year's US Open, but some of the usual suspects are undoubtedly going to be rated pretty highly, including Phil Mickelson and Rory Mcllroy.

Helpful Resources for Fans of the US Open

Destination for the 2015 US Open: Chambers Bay